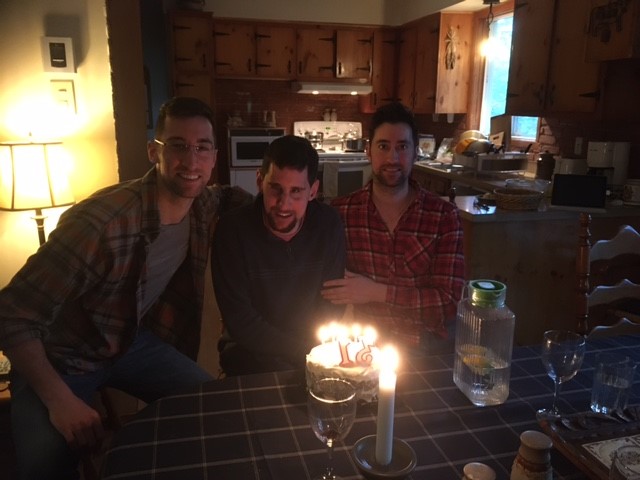 “Let them” was Anne-Marie’s response to people staring at her son, Steve. Without communication skills, Steve often screamed as a child… a form of expression. But, he could not hear the sound or volume of his frequent screams. Steve is deafblind.

Deafblindness is a combination of hearing and vision loss that is unique to each person. It can impact access to information, communication, and mobility.

Weighing just one pound and 14 ounces, Steve and his identical triplet brothers were born premature at 28 weeks. “At birth I learned that Steve had vision loss due to Retinopathy of prematurity. Before he was a year, I knew that he had hearing loss too. This was more difficult to determine, but around two, Steve was diagnosed as profoundly deaf. Steve also has chronic kidney disease,” says Anne-Marie.

Steve is completely blind in his right eye, with an eye prosthetic. In his left, he has between 10 to 20% vision, bending and moving his head to see with this eye. “We respected Steve’s decision to not use a hearing aid, which he doesn’t like. Even with the highest quality hearing aid, there are still many sounds he wouldn’t be able to hear,” Anne-Marie explains.

95% of what we learn comes from what we see and hear. As a child, it was very difficult for Steve to learn sign language. He had a hard time sitting still as well as sleeping. With a spirit for adventure, Steve often learned through discovery. “He was very curious, he would turn on the oven burners to watch them heat or try to get outside throughout the night, he was like Houdini. We had to install a fence around the yard and lock the doors from the inside.”

After years of sleepless nights and screaming, Steve was prescribed medication that helped him to reestablish his internal clock. “It was a game changer,” recalls Anne-Marie. From there, he learned Langue des signes Québécoise, LSQ for short. Anne-Marie learned some LSQ too, noting that she practices this skill more often with the team at DeafBlind Ontario Services.

Anne-Marie first learned about DeafBlind Ontario Services through Centre Jules-Léger, the province’s only French-language school for children who are Deaf or hard of hearing, blind or have low vision, are deafblind, or have learning disabilities.

“When I first visited one of DeafBlind Ontario Services’ locations in Kitchener, I knew it was what I wanted for Steve… somewhere he could live as independently as possible,” says Anne-Marie.

For eight years, the family waited for a location to open in the Ottawa area. Throughout those years, Steve received support from DeafBlind Ontario Services’ Community Services – Partnerships, which offers specialized expertise and services to individuals with deafblindness through their supporting agency.

Steve moved into DeafBlind Ontario Services’ new location earlier in 2020. “Steve and our entire family are so happy. He has come a long way, initiating conversation and increasing his knowledge of LSQ with consistent support from intervenors.”

“Steve has a home to call his own now, living as normal of a life as possible. Although it is difficult right now with social distancing, my goal is for him to socialize more, meet friends for coffee, or invite friends and family over for dinner in the future, to become more and more independent in his daily living. Achieving this will be possible because of Intervenor Services,” says Anne-Marie. Today, Steve still taps into his sense of discovery and curiosity to learn. “On his own, he puts his finger into his glass to determine when a drink is poured to the right level. He also brings his iPad close to his face so he can see a picture. He learned to slide from one image to the next using his nose… it’s very clever.”

“When you go through something like Steve has experienced, it’s really difficult. But, I am glad it happened to us. As a family, we see life so differently and appreciate the small victories. Every time Steve learns a new LSQ sign, we are so excited it’s unbelievable,” says Anne-Marie.

Over 1% of Canada’s population or approximately 466,420 people are deafblind, like Steve. DeafBlind Ontario Services provides accessible residential and customized support services across the province. Their holistic approach to Intervenor Services empowers people with deafblindness to achieve their goals and dreams. Learn more at deafblindontario.com.